The twins were living in Ottery St Mary from a very early age, after the family was forcibly removed from Milverton in Somerset. In 1841 at age 17, Abraham Burrow was living with his mother Amy and step-father in Jesu St in Ottery St Mary. His twin brother Isaac was working on a farm in Talaton. The fact that Abraham was not working, indicates to me that he was probably already in poor health. The fact that he died 3 years later at age 20, seems to confirm this hypothesis. I still need to get his death certificate to confim what he died of. Also the family seemed to have moved from Jesu Street to Yonder street between 1841 and 1844. This move was most likely occurred after Abraham's mother Amy died in late 1843.

Isaac was 17, but the ages were rounded down to the nearest 5 years. Also he was listed as born in Devon, which is not correct. Assuming Mr Pratt filled out the forms and didn't ask, he had no way of knowing that Isaac was not born in Devon. It is possible that Isaac himself was not fully aware of this since he was only an infant when the family left Somerset.

1851 census
HO107/1866 Folio 102 Page 14
Locksbrooke Farm, St Thomas, Broad Clist St Thomas, Devon
William Boutcher aged 51. He was a farmer running 230 acres, and employed 4 labourers. His wife was Elizabeth aged 40 and they had 5 children - Harriet Boutcher aged 23, Elizabeth Boutcher aged 16, Susanna Boutcher aged 10, John Boutcher aged 8, and Frederick Boutcher aged 5.
The staff included Mary Falson aged 30, who was the Governess, and there were also 7 servants. Isaac Burrow was a farm servant, aged 26 and still unmarried. None of the servants had their places of birth listed.

The marriage certificate says they were married on January 1st, 1854.

Isaac Burrow, and his new wife Jane, settled down in Ottery St Mary where they eventually raised 5 children. James, George, Bessie, John and William. As a side note - James, John & William are Burrow family names. George is not. James was also Jane's fathers name and Bessie is a variation of Elizabeth, which was Jane's mothers name.

By 1861 Isaac was working as a Shepherd. He and Jane had 2 children (James born 1855 and George born 1857) and for the first time Isaac's correct birthplace of Milverton in Somerset was stated.

By the 1871 census the family was complete with Bessie Jane born 1863, John born 1866 and William born 1868. Isaac's father-in-law, James Sulley by now was a widower and had moved from Exeter to OSM, and was living with the family. Young George was still at home, but James the eldest son had already left. At age 16, he was working as a servant in the home of James Manley and his sisters Jane and Mary.

In 1881 Isaac was working as an Agricultural Drillman. His Father-in-law James Sulley had died, and George had also left home. George and James had both married, and James had given Isaac 2 grandchildren. Sadly although Jane was still alive at the time of the census, she died a few months later.

In 1886 young William suddenly upped and left home. It turned out he got a young lady in the family way and they decided it was best if they moved elsewhere. William Burrow and his wife Mary Evans were married in Honiton on November 29th 1886, sailed on board the "Coptic" from Plymouth December 21st 1886, and arrived in Port Chalmers, Otago, New Zealand on January 22nd 1887. Their first child was born in Dunedin in April 1887 - 5 months after the wedding. William and Mary went on to have 11 children in total. See William's Page for Details.

In 1890 Isaac's only daughter Bessie Jane married her first cousin Isaac William Burrows . Isaac William was the son of Isaac's brother Thomas who had moved to Veryan in Cornwall sometime in the early 1850's. I'm thinking that Isaac William was probably named after Thomas's two surviving brothers - Isaac and William.

In that same year of 1890, Isaac's son John also got married. He and his wife Elizabeth (nee Barrett) continued to live with Isaac who was now a widower. Unusual for those times, Isaac never remarried. John and Elizabeth had one daughter, Elsie May Burrow, who grew up to marry Ernest Luxton. May and Ernest had at least one son William John Luxton who was born in 1921. William married Mary Prettyjohn and had 3 children - Frederick, Mary Elizabeth and Margaret Ann Luxton - all born after World War 2. 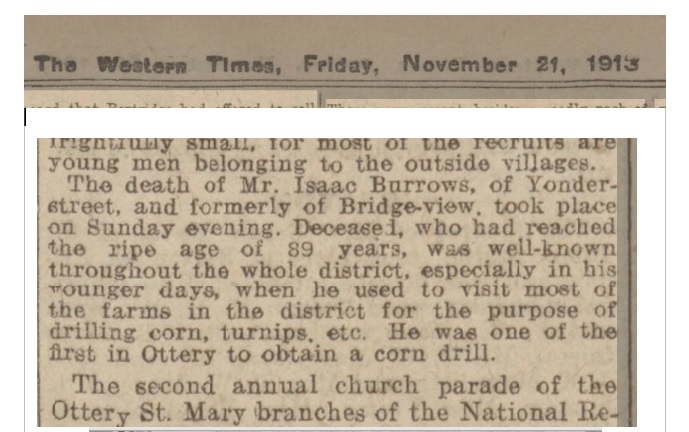 A notice from The Western Times Newspaper in November 1913 stating the fact of the death of Isaac Burrows at age 89.