Welcome to the No Fluoridation Campaign.

This is my attempt to STOP the ongoing Fluoridation of municipal water by the Toronto City Council. Yes, this is in Toronto, Ontario, Canada. Toronto has been dumping TOXIC Fluoride into the water since 1963 - now more than 50 years - and the damage it is causing to the health of Toronto residents is far too high. And yet Canada health refuses to admit that 1 - there is a health problem - and 2 - that the fluoride is causing it.

I can attest to the health concerns as I have watched my husbands health deteriorate over the last 12 years - since the early 2000's. As for me, I switched to drinking bottled spring water - which is available fairly cheaply from our local supermarket - back around the year 2007. Up until then, I drank the tap water as sparingly as possible - it always tasted funny and it often looked disgusting as well. Drinking Spring water has made a huge difference in my health compared to my husbands. Up until now, he purchased the bottled water because I demanded it - for my health and for our sons health as well.

Up until this year (2014) my husband has insisted on drinking tap water saying that there was nothing wrong with it. Over the last few months, I have persuaded him to try the spring water. After all he buys it only because I demand it, so why not try it. We still have to cook with the disgusting tap water, brush our teeth with it, wash the clothes and dishes with it and shower in this poisonous tap water.

I won't go into the reasons why the city puts fluoride into the city water. We all know it was done to supposedly prevent cavities in the teeth of children. And we all know that the fluoride in the water seldom even touches the teeth to be of any effective use. That is because the water goes down the esophagus to the stomach. It does not get the opportunity or chance to cover the teeth and do its job. This what Toothpaste is for. Fluoride is best used as a TOPICAL treatment - NOT an internal treatment.

Have you ever read the small print on a Toothpaste box? It actually says that Fluoride is poisonous and that if you swallow it, you must call the Poison Centre!!!! The fluoride added to toothpaste is the same toxic stuff that goes into the drinking water. 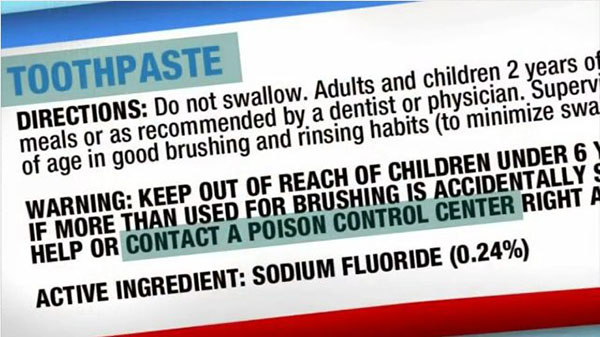 The municipal councils keep insisting that the extra fluoride they add to the drinking water is the same as the natural calcium fluoride found in the environment. They are dead wrong!! There is very little natural fluoride in the environment, because our bodies don't need a lot. What the city adds to our drinking water is a TOXIC sludge called Hydrofluorosilicic Acid, (aka Sodium Fluoride) which is a byproduct of industrial wastes from the aluminum and phosphate fertiliser industries 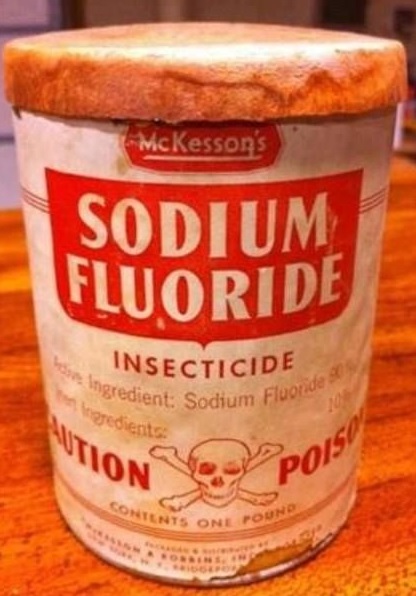 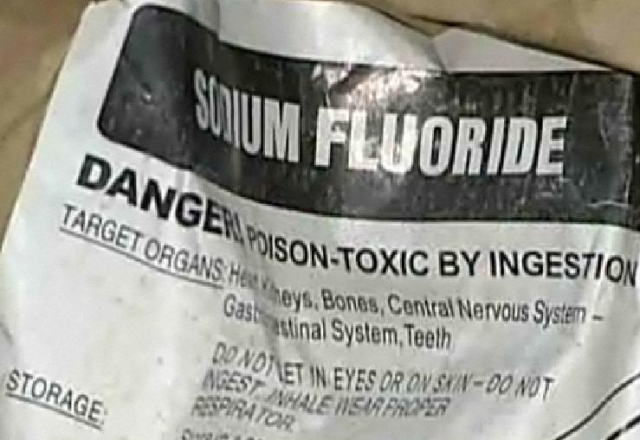 Just look at the possible damage from Sodium fluoride!! It says so in Black and White!!!!! DANGER POISON - TOXIC BY INGESTION. Do not get in Eyes or on Skin. Do NOT Ingest or Inhale. Target Organs - Heart, Kidneys, Bones, Central Nervous System, Gastrointestinal system and Teeth. And they put this stuff in to our DRINKING water? And we just sit back and ALLOW this to happen? WHY? You see, this is another side effect of fluoridating the water. We are being DRUGGED without our consent!!! It is long past time to STOP poisoning our children and ourselves. No wonder our heath care costs have gone up so much. We are being poisoned by the water. There is only one cure!! STOP POISONING the Drinking Water!!!! 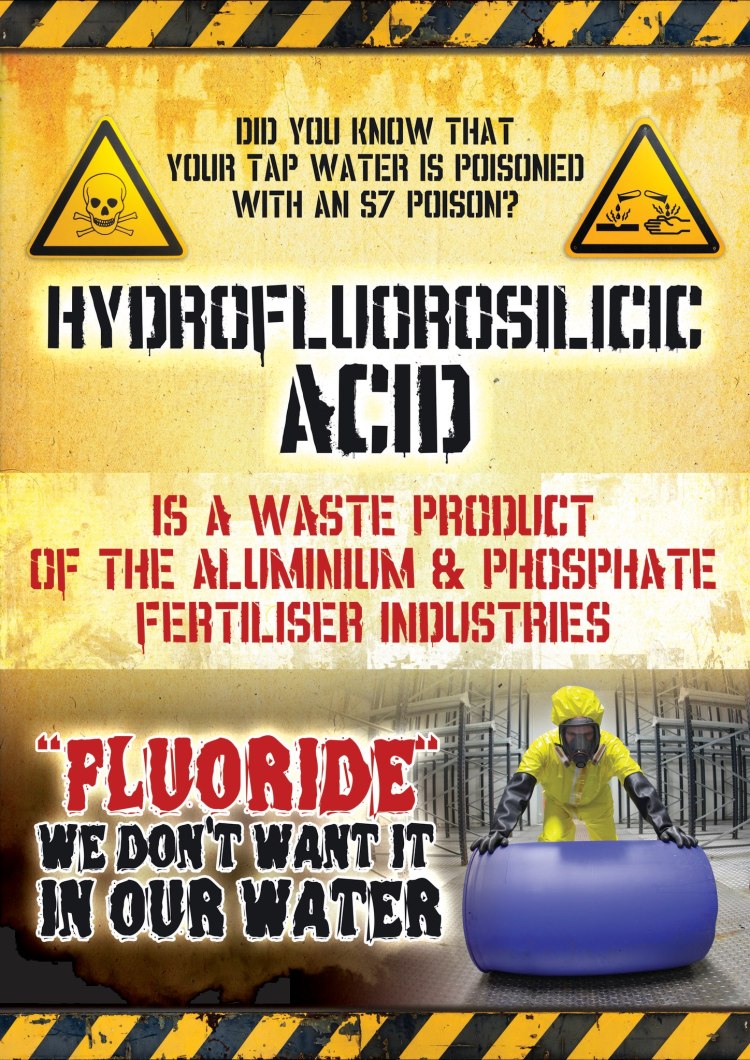 Below is a bottle of Natural Spring Water bottled in Ontario and sold as "Real Canadian Natural Spring Water." by the Loblaws Supermarket chain. I have been drinking this spring water since 2007 at least. The amount of Natural Calcium Fluoride in a 500 ml (Half litre) bottle is 0.07 ppm (parts per million). The most recent amount of Toxic Fluoride added to the Toronto drinking water is 0.7 ppm. Lets do the maths. 0.7 is equivalent to 70%. 0.07 is equivalent to just 7%. That is a HUGE difference!!!!