Vulcan Miscellaneous
Vulcan Animals
Sehlat.
Large, bear-like animal indigenous to the planet Vulcan. Sehlats are often kept as family pets as they were loyal, courageous and affectionate. As a child, Spock had a pet sehlat which was named I'Chaya. 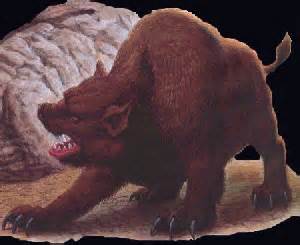 Le-Matya
A large, ferocious, cat-like creature that lives in the wilderness of the planet Vulcan. Le-Matya were very strong and swift and had very poisonous teeth and claws.

Vulcan Cuisine
Vulcan mollusks
An edible sea creature native to Vulcan that is noted to many, including Quark. He served an entre of jumbo Vulcan mollusks sauteed in Rhombolian butter to Fallit Kot who appeared to at least tolerate it.

Vulcan port
A dark blue-colored Vulcan variety of - if the Terran namesake is any guide - a hearty, fortified dark wine, bottled for at least 300 years. Quark had a bottle wintered in 2070 that he almost served to the Maquis member Sakonna.

Vulcan spice tea
A blend programmed in Tuvok's cabin replicator. He knew Janeway enjoyed it, although he had still not shared it with her by early 2373.

Vulcan Government
A founding member of the United Federation of Planets, the natives turned to logic as a path away from self-destructive violence nearly 2,000 years ago, and a splinter group with star drive left to found the Romulan Star Empire. Its government includes the titled leaders "ministers" -- including the security ministry, known as the V'Shar -- and a Bill of Rights to protect civil liberties.Though its people are pacifists, it maintains its own defense fleet. The hot, dry and marginally Class M world was aware of Earth but had no interest in the primitive world until a passing survey ship noted Chochrane's warp signature on April 4, 2063, and became the first alien contact in human's history.
In recent years, an extreme isolationist movement has sprung up dedicated to withdrawal from the United Federation of Planets and fighting the "pollution" of Vulcan culture. Meanwhile, an underground group on Romulus worked to spread peaceful reunification between the worlds.